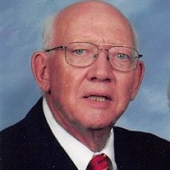 The Rev. William E. Ballard, 77, of Lacona, died November 12, 2015, at Iowa Methodist Medical Center in Des Moines. The family will greet friends from 5:00 p.m. to 8:00 p.m. Friday, November 20, 2015, at Pierschbacher Funeral Home in Chariton. Funeral services will be at 10:00 a.m. Saturday, November 21, 2015, at First United Methodist Church in Chariton, followed by a luncheon. Burial will be at Cochran Cemetery in Lacona. Bill was born February 24, 1938, in Nevada, Iowa, the son of Claude and Hazel (Holland) Ballard. Bill's Story County roots run deep. He was a great-great-grandson of Mormon Ballard, who with his brother was dispatched by the Dragoons from Fort Des Moines to settle Story County in 1844. Schools, businesses, a creek, and other natural features in the Huxley area still bear the family name. Bill graduated from Collins High School in 1956 and enrolled at Simpson College, where he played basketball and baseball and was a member of Lambda Chi Alpha fraternity. He met Sue Ellen Goode at Simpson, and they were married in 1960. Bill began serving as a student pastor in the Methodist Church while a student at Simpson. He graduated from Simpson in 1960, then attended Iliff School of Theology in Denver, Colorado, where he earned master's degrees in divinity and religious education in 1964. Bill was ordained a deacon in the Iowa Methodist Church in 1963 and a full elder in 1965. Over the course of his 49-year career in ministry, Bill served Methodist and United Methodist churches in Armel, Colorado, and many communities in Iowa including Lacona, Liberty Center, New Virginia Larger Parish, Council Bluffs (Broadway), Hamburg, Rock Valley, Doon, Dysart, Centerville and surrounding Appanoose County communities (Cincinnati, Exline, Jerome, Mystic, Numa, and Unionville), Nevada, Oskaloosa, Eagle Grove, and Bedford. After retiring from ordained ministry in 2006, Bill became a hospice minister with Hospice of Central Iowa (later HCI Care Services), retiring for a second time in 2013. Bill and Sue Ellen retired to Lacona. Bill was elected Mayor of Lacona in 2009 and served in that office through his death. Bill also served as Chaplain of the Iowa Law Enforcement Academy for more than 27 years, starting in 1988 and continuing through the date of his death. Bill taught courses in Moral Aspects of Use of Force and Death Notification, and he served as chaplain at every ILEA commencement from the 108th through the 163rd Basic Police Academy Classes. Bill was active in numerous civic, community, and professional organizations throughout his professional life including Boy Scouts of America, Rotary International, Kiwanis, and LakeView Country Club in Chariton. He was Iowa's representative to the Town and Country Ministry of the United Methodist Church's North Central Jurisdiction for many years, and was a Master Mason and member of the Order of Eastern Star for nearly 50 years. In 2010, he served as Honorary Grand Marshal for Simpson College's commencement. Bill raised Simmental cattle with Sue Ellen's family and was a member of the Iowa Cattleman's Association and the Iowa Simmental Association (Christensen Elite Award recipient, 2015). He served as a judge for many 4-H county fairs over the years. A self-taught auctioneer, Bill helped carry on Goode Auction Service, founded by Sue Ellen's grandfather in Lacona more than 100 years ago, and called numerous estate, equipment, and charity auctions over the years. Bill enjoyed spending time with his family, gathering without fail for holidays and reunions, attending activities of children, grandchildren, and great-grandchildren, and vacationing at lakes in Minnesota and elsewhere. Bill is survived by his wife, Sue Ellen of Lacona; three sons, Bill (Kim Walker) of Oskaloosa; Steve (Jennifer) of Iowa City; and John "Eddie" (Jodi) of Des Moines; six grandchildren, Marty and Lindsey of Oskaloosa; Jack, Ellie, and Maggie of Iowa City, and Georgia of Des Moines; and four great-grandchildren, Maggie Hindley of Centerville, and Hunter, Bently, and Easton Holdsworth of Oskaloosa; a sister, Jane Kliebenstein of Shell Rock; sisters-in-law, Kristine Ballard of Mitchellville, Janice Goode of Lacona, and Linda Goode of Des Moines; a brother-in-law, Lisle Goode of Des Moines; and many nieces and nephews. Bill was preceded in death by his parents; a brother, George Ballard; a sister-in-law, Diane Oak Goode; and brothers-in-law, Glen Kliebenstein and Robert Goode. In lieu of flowers, the family requests that memorial contributions be made to Lacona Fire and Rescue, the United Methodist Church of the donor's choice, or Simpson College. Cemetery Details Cochran Cemetery 230th Ave
Lacona, IA 50139 Visitation

To send flowers to the family in memory of William Ballard, please visit our flower store.