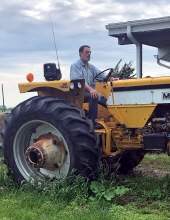 A graveside service for Ronald R. Hofmann, 54, of Humeston, Iowa will be held on Tuesday, August 24, 2021, at 2:00 p.m. at the Humeston Cemetery. Memorials may be made in care of Ronald’s family.

You may view the service by following the link on Ron's tribute page, https://my.gather.app/remember/ron-hofmann

Ronald Hofmann was born on February 17, 1967, to Silas “Si” and Thelma (Knecth) Hofmann in Corydon. He grew up in Wayne County and always lived within five miles of his home place. He was a 1986 graduate of Mormon Trail High School.

Growing up, Ron would help his dad on the farm milking cows and building fences. He helped many other local farmers as well. Along with farming through the years, he worked at Lucas Products and Traeger Motors.

Ron loved being a grandpa to his granddaughters, Maizey and Raeleigh “RaeRae.” He was quite fond of “Nipper” the Blue Heeler as well. He had a Holstein steer he also considered a pet.

Ron enjoyed taking the kids to tractor pulls. He had a great love for Minneapolis Moline tractors. He was very fond of being outdoors whether he be fishing, mushroom hunting, gardening, or trapping.

Preceding him in death were his father, Si; brothers, Michael Hofmann and Dan Hofmann; sister, Christine Hofmann; father and mother-in-law, Virgil and Katherine Siddens; and a very special friend of the family, Jason Throckmorton.
To send flowers to the family in memory of Ronald R. Hofmann, please visit our flower store.