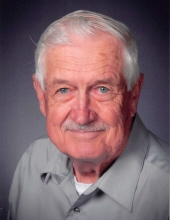 Memorials may be made to The Gideon's International or to the Russell Baptist Church.

The service will be livestreamed through the following link: https://my.gather.app/remember/robert-hensley-2022

Robert Keith Hensley was born on March 22, 1932, to Hall and Floy (Fenton) Hensley in Mystic, Iowa. He graduated from Chariton High School in 1952. He met his sweetheart, Marie Hazlett, in high school. The two were married on August 31, 1952. To this union, they were blessed with three children: Mike, Timothy, and Renee.

Bob worked for the FBI doing fingerprints for a few years then joined the Coast Guard. He served from August 29, 1952, to May 17, 1956. From 1956 to 1960, he worked for the Arizona State Highway Department. From there, he began with the Salt River Project at the Power and Water Department. He served in various roles from zanjero to Superintendent at the water department where he worked until his retirement in 1989.

Bob really enjoyed people, always having adventures with his friends. He and Lowell Sims had some really good times together. He really led a full life, and loved his family dearly.

He was preceded in death by his parents, Hall and Floy: son, Timothy; daughter, Renee; and brother, Richard.

To send flowers to the family in memory of Robert "Bob" Hensley, please visit our flower store.