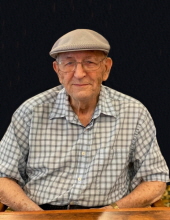 Richard “Dick” Dean Seddon, age 88, passed away July 5, 2022, at West Ridge Specialty Care in Knoxville, Iowa. Private services will be held at a later date, with burial in the Cambria Cemetery. Memorials may be made in Richard’s name to The Des Moines Symphony or the family.

Richard was born at home in Chariton, Iowa on December 31, 1933, to Sarah and William Seddon, Jr. After his parents both passed away at a young age, he was raised by his maternal grandparents Arthur and Nora Williams. He was also very close to his mother’s sister and her husband, Neva and Vernon Jeffries. Their children Jim, Janice, Carol, and Joe were like siblings to him.

He attended elementary school in Chariton and graduated from Chariton High School with the class of 1952. He enjoyed playing trumpet in the High School and American Legion Junior Bands, and it was in the American Legion band that he met his future wife, Linda Marie Relph. In later years, they both played in the Russell Town Band.

After high school, he worked for a short time for his uncle Vernon Jeffries, and then worked at Johnson Machine Works from 1952-1953. In 1953, Richard went to work for C.E. “Buzz” Dunn at the Dunn Monument Works. In December of 1953, he entered the U.S. Army and was stationed at Fort Leonard Wood, Missouri. He was discharged from the Army in December of 1955, having attained the rank of Sergeant.

Upon his discharge from the Army, he returned to work for Mr. Dunn. In 1966, he purchased the business from the Dunn family after Buzz Dunn’s death. In 1987, his son Gary joined the company full-time.

On June 15, 1957, he was united in marriage to Linda Marie Relph at the Baptist Church in Chariton, Iowa. The couple made their home in Chariton and were soon blessed with three children: Carol, Shari, and Gary. Richard’s family was very important to him, having lost his own parents at such a young age.

He loved music; at a young age he enjoyed jazz and popular music, but as he got older, he became a huge fan of classical music, particularly romantic-era music. He had an enormous collection of LPs, cassette tapes, CDs, DVDs, and books. He also enjoyed reading, mostly nonfiction books. Some of his favorite topics were Abraham Lincoln, World War II, music, and Hawaii. He and Linda took many trips to Hawaii. He loved Christmas time.

Preceding him in death were his mother, his father, and his wife Linda.

To send flowers to the family in memory of Richard Dean Seddon, please visit our flower store.