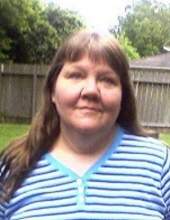 A Celebration of Life will be held for Penny Withem, 60, of Chariton on Friday, August 19, 2022, beginning at 4:00 p.m., with a time of sharing at 5:30 p.m. at the Pierschbacher Funeral Home in Chariton, Iowa. Memorials may be made to Penny’s family, and there is also a tribute fund available on the funeral home’s website if you wish to donate to the family.

The time of sharing will be livestreamed. You can watch it via the following link: https://my.gather.app/remember/penny-withem

Penny Sue (Pennington) Withem was born on July 6, 1962, in Iowa City to John and Elsie (Boyle) Pennington. She grew up in Chariton, then moved to Oklahoma in 1977 where she worked at a grocery store in Chandler owned by Bob and Beverly Kerns. She did some housecleaning as well for CMJ & Carrie Collier. She was blessed with two sons: Matt and Paul.

Penny and her boys moved back to Iowa in 1999. She met James “Jim” Withem on November 13, 1999, and the couple married six months later on May 13, 2000, in the family’s living room. To this union, Penny was blessed with gaining a stepson, Bill Withem.

The family resided in Chariton for a couple of years where she worked in maintenance at the Lucas County Hospital. From 2001 to 2003, they moved to Des Moines. In May 2003 until January 2016, they moved to Houston. While residing there, Penny worked with SSG Ronald Payne for Allied Freedom and helped Afghans who had worked as interpreters for our troops in Afghanistan to resettle in the United States. She would assist them once they flew into Houston in finding an apartment, finding work, and anything else they needed to settle in the U.S. In 2016, the family moved back to Chariton where they have resided since.

Penny became known to many as “mom” due to her passion for taking care of others, as well as her larger-than-life personality for giving and helping others. She was always making up nicknames for others as well. She never really knew a stranger, welcoming everyone she met.

As well as her love for others, Penny had a love for animals, especially her cat, Tammy, that lived to be nearly 25 years old, numerous dogs, especially her Dachshunds, Julie and Taffy, Chihuahua mix, Scooter, who she rescued from the Houston streets, and most recently, George, a rat terrier mix.

She was preceded in death by her parents, John and Elsie, and her brother-in-law, Dan Woerth.

To send flowers to the family in memory of Penny Sue Withem, please visit our flower store.