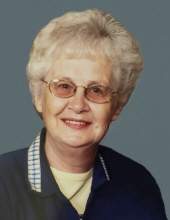 A celebration of life will be on Friday, October 15, 2021 from 4:00 P.M. to 7:00 P.M. at Pierschbacher Funeral Home in Milo. Memorial contributions may be made in care of Pat’s family to be used for a Southeast Warren Scholarship.

Patricia (Pat) Lou Yardley was born April 3, 1940 to Kenneth and Helen Yardley. Pat was raised on a farm near Pollock, Missouri alongside her twin sister, Nancy, and their sister Gloria. Pat attended a one-room school house through eighth grade and then graduated from Milan High School with the class of 1958.

While a junior in high school, a friend set her up on a blind date with John Riley. The two hit it off and began dating. After graduation, Pat worked at the Bell Telephone Company in Kirksville, Missouri where John was attending college. John and Pat were united in marriage on November 27, 1958 at Boynton, Missouri. Pat continued to work at the telephone company while John finished his degree in education. John’s first teaching job was in Lovilia, Iowa where their first child was born in January 1962.

In the fall of 1962, the family moved to the Southeast Warren School District and settled in Milo. Pat soon started working as a telephone operator at Bell Telephone in Des Moines. In 1971, Pat switched careers and became a teller at Peoples Trust and Savings Bank in Indianola. In 1980, she became the branch manager in Milo until the bank was sold. Pat then worked in Indianola and retired from the bank in 2005.

For many years, Pat volunteered with the American Heart Association fund drive and served as a chairperson for several years. She was also a promoter and advocate for the Banks New Horizon club which began in 1986. Pat also sold Avon, Home Decor, and BeeLine clothing.

Through the years, Pat helped John remodel several older houses in Milo, three of which they lived in at various times. They also built about a dozen new homes in the area. Pat was known to comment about never getting to live in the new ones! Pat and the children were very helpful and supportive in these projects.

In 1998, Pat and John started selling a variety of merchandise at gun shows and flea markets all around the mid-west, venturing as far east as Kentucky. Pat really enjoyed ordering and sorting the merchandise, as well as working the shows. They continued this until 2020.

Pat and John made several trips to the west coast to visit their nephew and niece in Washington State. Each trip included extensive sight-seeing along the way. The couple really enjoyed the National Parks, especially Yellowstone and the Teton area.

The “trip of trips” was in 2007, when they went on a 6 week trip to Alaska. Pat was not very enthused with the idea, but when she was faced with the choice of going or staying home alone, she went and enjoyed the entire adventure. Four weeks of the trip were spent driving all over Alaska, visiting most of the major cities and parks. They also checked out the oil pipeline and its terminal at Valdez. On July 4, 2007, they drove from Fairbanks to the Arctic Circle. They crossed the Yukon River several times and panned for gold at Denali National Park.

Pat loved crocheting, quilting and making rugs. She also enjoyed gardening and canning large quantities of tomatoes and green beans. More than anything, Pat loved spending time with her children and grandchildren. There was never any doubt about her love for her husband, children and friends.

Pat was a trooper. She always faced life with a smile and concern for others. Pat was a breast cancer survivor, being diagnosed in 1986. All through surgery and chemo, she never complained and continued her life as normal as possible. When she was diagnosed with dementia, her concern was not for herself, but how it would affect her family.