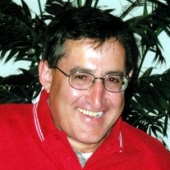 Michael Schaffer, 58 of Centerville, passed away April 17, 2017. Funeral Services will be held Saturday, April 29, 2017 at 11:00 a.m. at St. Mary's Catholic Church in Lacona. A luncheon will follow at the church. Interment will follow the luncheon at Sunset Memorial Gardens in Des Moines. Family will receive friends at the Pierschbacher Funeral Home in Lacona on Friday, April 28, 2017 from 6:00 until 8:00 p.m., with a wake service at 7:30 p.m. Memorial contributions may be made to the Glaucoma Research Foundation. Michael Joseph Schaffer was born September 4, 1958 to Wayne and Hilda Dittmer Schaffer in Chariton, Iowa. Michael was one of five children born to the couple. The family lived in the Lacona area for a few years before moving to Des Moines in 1961. Michael attended St. John's Catholic Elementary School. As a child, Michael enjoyed playing baseball and riding his bicycle. He graduated with the Lincoln High School class of 1975. Michael continued his education at Grandview College and graduated with a degree in Journalism. In his younger years, Michael worked for the Department of Natural Resources and in a dentist's office. He used his journalism degree while working for the Oskaloosa Herald and as editor for the Daily Iowegian in Centerville for the past ten years. During Michael's time at the Daily Iowegian newspaper he received the prestigious Harrison "Skip" Weber Investigative Journalism Award in 2013 for his reporting and a third place award for Best Spot News Photography in 2010 from the Iowa Newspaper Association. In addition to writing and editing for the paper, Michael enjoyed taking photos. He enjoyed photography both on and off the job. Some of his other hobbies included playing golf, talking about politics, collecting vinyl records, and rooting for the Kansas City Chiefs. Michael is survived by his father, Wayne Schaffer; siblings: Barbara Ford, Anthony Schaffer, Susan Schaffer, and Brian (Jill) Schaffer; 9 nieces and nephews: Jason, Amy, Christopher, Andrew, Katie, Jeff, Lisa, Matthew, and Madison; along with great nieces and nephews, aunts, uncles, relatives, and friends. He was preceded in death by his mother, Hilda Schaffer. Cemetery Details Sunset Memorial Gardens 7601 Fleur Drive
Des Moines, IA 50321 Visitation

To send flowers to the family in memory of Michael Joseph Schaffer, please visit our flower store.