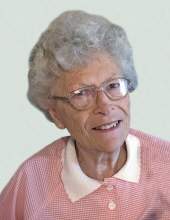 The service may also be viewed by following the link:
https://my.gather.app/remember/mary-nolte

Mary Louise Davis was born in rural Marion County to Ephie and Christeena (Parker) Davis on May 18, 1932. She was the youngest sibling of six. She was a graduate of the Dallas Consolidated School and was a member of the St. John Lutheran Church.

On October 1, 1953, Mary was united in marriage to William Nolte. They made their home on a farm near Dallas, Iowa. Their marriage was blessed with a son, William II, and a daughter, Carol.

Mary enjoyed being a Sunday School teacher and a Cub Scout leader when their children were in elementary school. She was employed at Blue Cross in Des Moines and later as an Accountant at Chariton Manor, as well as serving 22 years as School Board Secretary/Superintendent Secretary at Melcher-Dallas Schools.

Mary was devoted to her family and enjoyed being a grandmother. Some favorite memories with her grandchildren were New Year’s Eve parties and playing school. She also enjoyed her Saturday morning shopping trips with her daughter, Carol.

Mary was always taking care of things, making sure things got done. She wasn’t afraid of hard work either, whether it be walking the field for thistles to walking beans. She was always interested in reading and learning new things.