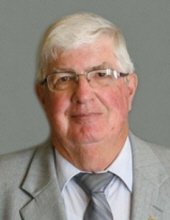 Funeral services for Loren L. Burkhalter, 79, of Chariton, will be held Saturday, October 30, 2021 at 11:00 a.m. at the Grace Baptist Church in Chariton. Interment will be at the Chariton Cemetery.

Family will receive friends on Friday, October 29, 2021 from 4:00 until 7:00 p.m. at the Pierschbacher Funeral Home in Chariton. Memorials may be made in Loren's name to Chariton Kiwanis, the Chariton Public Library Foundation, or Lucas County 4-H.

You may join Loren's family via livestream at https://my.gather.app/remember/loren-burkhalter

Loren Lester Burkhalter was born on June 13, 1942, to Arthur Frederick John and Merle Irene (Bunting) Burkhalter in a farmhouse near Stringtown in Adams County, Iowa. He grew up on the family dairy farm near Cromwell. He trusted in Jesus as his Lord and Savior as a young man. When polio affected his father, Loren took on the responsibility of running the farm and caring for the family. He was in the last graduating class from Cromwell High School in 1961. He attended Northwest Missouri State University in Maryville, where he met his wife, Lucinda Lynn Gray. They were united in marriage in Cedar Rapids, Iowa, on August 12, 1967. He earned a Masters’ degree in Elementary Administration in 1971.

Loren demonstrated his love for Christ through a life of service to others through his vocation and to his community. He was a school teacher and bus driver, in Missouri and Nebraska, before taking a position at an elementary school in Orient-Macksburg, Iowa. In August 1973, the family moved to Chariton and he became the principal of Columbus, Williamson and Lucas Elementary schools where he served for 31 years until his retirement in 2004. Loren was actively involved in his community, faithfully serving in his church, Grace Baptist. He was a charter member of the local Kiwanis club. In retirement, he continued to invest his time as a volunteer at the Pin Oak Marsh, the local food bank and many other community events.

Loren’s strong Christian faith guided him in raising his family. He was a dedicated, loving husband, father and grandfather. With his family, he enjoyed many outdoor activities. Together they planted yearly gardens, camped across the United States, fished many ponds, and went Christmas caroling. He was an avid outdoorsman who enjoyed nature photography, birdwatching, cycling, hunting, and cross country skiing. He was a fan of mind stretching puzzles like jigsaw and Sudoku. He was an avid reader of westerns and history. Loren was the family baker of pies, cakes, and cut-out cookies with the grandkids. A true jack of all trades and master of many skills.