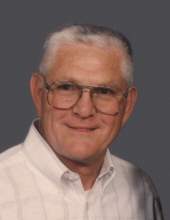 Leo R. Steinbach was born January 19, 1931 to George and Katherine Steinbach in Lucas County, Iowa. Leo was one of five children born to the couple. He attended school in Chariton and graduated from Chariton High School with the class of 1949. Leo attended the University of Iowa for a semester before running out of money. He then went on to enlist in the United States Navy.

Leo met a girl named Kay Carson while spending time at Lake Vista. The two became a couple and were united in marriage on June 11, 1956. They were blessed with four sons. The family was always together. They especially loved spending time at the lake with friends, fishing and boating.

The Steinbach Locker was a big part of Leo’s life. When his boys were young, they loved going to work with their dad at the meat locker. When the locker closed in the fall of 1986, Leo took a job with Hy-Vee. He enjoyed working an eight-hour shift and continued to do so until his retirement in 2006 at the age of 76.

Leo was always a hard worker. He worked hard and played hard. Even after retirement, he stayed busy. Leo enjoyed mowing the yard, cutting firewood, and working on woodworking projects such as, rocking horses, barns, and doll houses. He loved doing things for other people and enjoyed when friends would stop by to visit. He especially loved time spent with his family. Kay, the boys, and his grandchildren were his whole world.

Leo was preceded in death by his son, Scot Steinbach in 1975; and siblings: Larry Steinbach, Rosemary Evans, Cecilia Farrell, and Jim Steinbach.
To send flowers to the family in memory of Leo Steinbach, please visit our flower store.