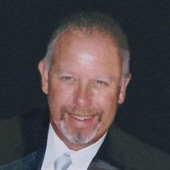 Graveside Services for Kirk Kyner Secrest, 56, of Cedar Rapids (formerly of Humeston), will be held June 5th 2021 at 11:00 a.m. at the Humeston Cemetery. In lieu of flowers, contributions can be made in Kirk's name to help support agricultural projects in Southern Iowa, in care of his daughter, Dianna Edwards 135 N. Sunset Dr. North Liberty, IA 52317.

Kirk was born on June 21, 1964 (Father's Day) in Denver, Colorado to Priscilla Kyner Secrest Beatty and Edward Lee Secrest. Kirk was the proud father of three children, Aaron, Dianna, and Emily. He was a graduate of the Mormon Trail High School Class of '82.

Kirk was an avid sports fan and an especially devoted supporter of the Chicago Cubs. He cherished his many experiences and memories in and around Wrigley Field. Few things gave him more joy than rooting for this three kids and three brothers in everything they did. He was always their biggest fan.

Kirk dedicated his professional career to Agriculture, both as a farmer and agronomist. Kirk had a deep passion for helping others succeed and he was always looking for a new product or technique that would give farmers an edge.

Kirk will be remembered most for his generous spirit and dedicated stewardship to both the land and people he held so dearly.

Since Kirk’s passing, he was joined in heaven by his mother Priscilla and father Edward.
To send flowers to the family in memory of Kirk Kyner Secrest, please visit our flower store.