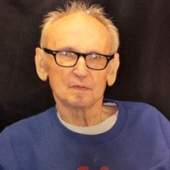 Mass of Christian Burial for John Wadle, 80, of Milo will be Monday, April 23, 2018 at 10:00 a.m. at the St. Augustine Catholic Church in Milo. Burial will be at the Rosemount Cemetery. A luncheon will be held at the church following the burial for a time of refreshments and visiting with family and friends. John requested memorials to be given to the St. Augustine Church in Milo. To view the full obituary or leave online condolences go to pierschbacherfuneralhome.com. John was born August 18, 1937 in Lacona, Iowa to Otto and Mary (Kessler) Wadle. He was one of 6 children raised in southern Warren County. He attended Milo Schools from 1943 until 1955. After graduating Milo High School John went to AIB from 1971 to 1973 and later attended classes at Drake University. He joined the United States Army and served from October of 1962 until January of 1965. He often talked with his nieces and nephews of his time in the service. After returning home he worked for Younkers, Kohls, and Burlington Coat Factory in Des Moines. John moved back to Milo in 1998 where he was very involved with his church. His nieces and nephews remember him playing baseball and running races against them when they were children. He was very fast and quite a good hitter in baseball. He loved being a fan of the Chicago Cubs and the Iowa Hawkeyes. He enjoyed studying the stats of all the players and could remember everything he read about them. John liked to read and to share his knowledge of his family and Milo community. John passed away April 20th 2018 at the Indianola Good Samaritan Center at the age of 81 years. Preceding him in death were his parents: Otto and Mary; and his siblings: Floyd Wadle, Milda Wadle, Ruth Wadle, and Mary Buckalew. He will be greatly missed by his brother Gerald G. Wadle, and many nieces, nephews, relatives, and friends. Cemetery Details Rosemount Cemetery 22925 Quebec St.
Lacona, IA 50139 Service

To send flowers to the family in memory of John J Wadle, please visit our flower store.