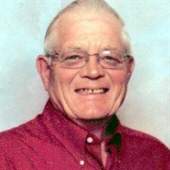 Funeral services for John Griffin, 76, will be Tuesday, April 23, 2019 at 1:30 p.m. at the Fairview Christian Church near Pleasantville. A luncheon will be held before the service beginning at noon. Interment will follow the service at the Hartford Cemetery. Family will receive friends from 5:00 until 7:00 p.m. on Monday at the Pierschbacher Funeral Home in Melcher-Dallas. Memorials are requested to the Melcher-Dallas Fire Department or to the Fairview Christian Church. John Edward Griffin was born March 28, 1943 in Des Moines, Iowa to Keith and Katheryn Griffin. He grew up in the Hartford area and graduated from Hartford High School in 1961. John met Marian Keeney while he was doing chores for a neighbor and Marian was babysitting at this neighbor's house. The courtship had begun and they were married on November 23, 1962. They were blessed with two children: Janet and Brad. Brad likes to say they stopped with perfection. John began working as a hired hand for local farmers and eventually owned and operated his own farm. They moved to just north of Melcher in 1966 and stayed there until 1991 when they moved to Mississippi and then to Dayton, Ohio. During this time he enjoyed working for M&W Windows and Storage Inns of America. John and Marian moved back to Melcher in November of 2018. John was very active in his community starting out at a young age by participating in 4-H and then becoming a 4-H leader. He was active in showing cattle and enjoyed going to Dairy shows. He held offices in the District 10 Holstein Association, Mid American Dairy, Farm Bureau, and was the Marion County Dairy Barn Superintendent to name a few of the organizations he was active with. John was also an Elder and church board president at the Fairview Christian Church. John also liked to have fun. While raising his young family they always took time to go to the Knoxville Raceway every Saturday, he continued to watch the sprint cars and also enjoyed NASCAR. He loved woodworking and built countless treasurers for his family and friends; doll cradles, book shelves, toy boxes, hat racks, and quilt racks. As his family describes him, he had a love for playing Pitch, farming, and people. They also know that his family was his greatest love. A love for his wife, children, grandchildren, and great grandchildren. John passed away at the Iowa Methodist Medical Center in Des Moines on Friday, April 19, 2019. He will be greatly missed by his wife of 56 years, Marian Griffin; children: Janet (Jim) Wallace and Brad (Jen) Griffin; grandchildren: Clinton (Cheyanne), Keye (Jessica), Megan (Brandon), Kody (Carly), Josh, Jordan, Shaun (Heather), Calob, and Kerri (Chris); great grandchildren: Griffin, Cora, Guthrie, Paislee, Levi, Francis, Keegan, Lilleth, Deacon, Ainsley, Kambri, Zoey, Halen, and Brentley; siblings: Leslee Manhart, Lantz (Mary Ann) Griffin, and Jeri (William) Manhart; along with many nieces, nephews, relatives, and friends. He was preceded in death by his parents: Keith and Katheryn Griffin; and siblings: James Griffin, Karen Horn, and Linda Griffin. Cemetery Details Hartford Cemetery Freemont St
Hartford, IA 50118 Visitation

To send flowers to the family in memory of John Edward Griffin, please visit our flower store.