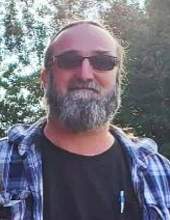 You may join Jason’s family via livestream at
https://my.gather.app/remember/jason-atkinson

Jason Andrew Atkinson was born on February 3, 1976, to Thomas Atkinson Jr. and Patti Rendos in Grove City, PA. The family moved to Des Moines when Jason was 2 years old. He attended North High School where he graduated as a member of the class of 1994. He met Susan Welsh when she was 16. He knew that day he met the person he was going to marry. A soft spoken and shy girl found herself a tall, no filter, man in all black. His own mother asked him if she was rebelling against her parents. The “odd” couple married on May 8, 1999. They were blessed with 4 beautiful children: Vanessa, Emily, Joey, and Heather. Joey passed away in 2007 at just twenty months of age.

What did Jason do for a living? A shorter list may be what he didn’t do. A self-proclaimed jack of all trades and master of none, he tried his hand at many things. In his early years, he worked as a telemarketer, mechanic, and even a bouncer (to name a few). Eventually he settled into driving truck for Hy-Vee, which has been his work-family for the last 12 years. His creative soul and entrepreneurial spirit wouldn’t allow him to do just one thing, so he always had a side business or a variety of hobbies to keep him entertained: farming, operating a food truck, woodworking, welding, tattoos, riding motorcycles, anything technology related, trying the latest gadgets, or just working on a variety of things around the house. Occasionally, Susan (or Dave Ramsey) had to remind Jason that he couldn’t afford to try his hand at every trade.

Grizzly bear on the outside, teddy bear on the inside is how his girls describe him. Jason was respectful but would also tell you exactly what he thought, very often dripping with sarcasm. His children loved him dearly and enjoyed going toe-to-toe with him. They will miss so much of the life he brought to their world and are already missing his spicy chili.

He is preceded in death by his son Joey, and stepfather Joe Hill.
To send flowers to the family in memory of Jason Andrew Atkinson, please visit our flower store.