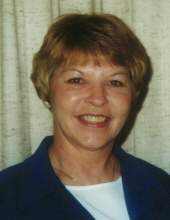 Janet Mae Throckmorton, 78, of Chariton, Iowa passed away on August 5, 2022. A visitation will be held Monday, August 15, 2022, from 4:00 until 5:30 with a service being held at 5:30 at the Pierschbacher Funeral Home in Chariton. A private graveside service at the Chariton Cemetery will be held at a later date. Memorials may be made to the American Cancer Society.

The service will be livestreamed through the following link: https://my.gather.app/remember/janet-throckmorton

Janet dearly loved her family. She had a special bond with her sisters that continued through the years. She was born on March 23, 1944, to Al and Hazel (Hull) Schumann and raised on a farm in Chariton (near Derby).

As Garry would contest, Janet was a beautiful lady, both in body and spirit. She had such compassion for others, showing a deep unconditional love for her family and friends. She was a loyal, honorable, and thoughtful person. It was a blessing to know Janet.

Janet worked in the medical field for 40 years, retiring in 2004. She did enjoy golfing in her free time. She and Garry were members at Humeston Golf Course for many years.

She was preceded in death by her son, Mark; parents, Al and Hazel; an infant sister, Jewell; three brothers: Don, Hubert, and Gary, and then there were three.

To send flowers to the family in memory of Janet Mae Throckmorton, please visit our flower store.