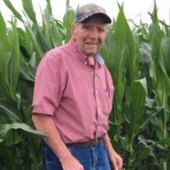 Mass of Christian Burial for Harold W. Wachter, 92, of rural Milo will be held Monday, January 18, 2021 at 10:30 a.m. at St. Augustine Catholic Church in Milo. A visitation will be held on Sunday, January 17, at the Pierschbacher Funeral Home in Milo from 2:00 until 4:00 p.m. with a Rosary to be held at 1:30 p.m. In lieu of flowers, memorials may be made to the Rosemount Cemetery Fund or the Warren County Fair. Friends may also join the family by viewing the service at the following link: Harold was born in his family's home on August 8, 1928. Harold lived his entire life in the Lacona and Milo area except for 21 months when he served in the Army Infantry during the Korean Conflict fighting on Heartbreak Ridge. He attended Kindergarten at Fairview country school 5 miles north of Lacona. He attended 1st through 8th grade at Rosemount School. Harold graduated from Milo High School in 1946. He was drafted into the Army and started his basic training in January of 1951 at Ft. Riley, Kansas. After basic training, Harold was assigned to the 7th Infantry Division, 31st Infantry Regiment Company, Korea. He boarded a ship in July, 1951 destination Korea. He went to the Front Line in the area straddling Heart Break Ridge. In November, they moved east to include the Punch Bowl. They defended this line for an entire winter until March of 1952. He was squad leader during this time. Harold was injured in battle and earning him the Purple Heart. They were ordered back for a well earned rest. Harold was in this battle front area until mid July when he earned enough points to be relieved of his Korean duties. On returning to the states, the ship docked at Seattle, Washington, August 8th on Harold's birthday, always saying that it was the best birthday present he ever received. The soldiers were greeted at Seattle by many residents. Harold received Honorable Discharge, October 1952. He is a member of the Milo American Legion. After returning from the service, he began farming with his dad and brother until 1957 when he established his own operation. Harold started his Registered Angus herd in 1958 when he bought an entire herd dispersion. Over the years, he sold cattle to many cattlemen across several states. Harold believed in conservation and implemented many practices to improve the land. Along with terraces, tiling, and other row crop practices, he implemented good grazing practices to use the cattle to preserve and improve the land. Needless to say, Harold was a hard-worker and a perfectionist. He loved to take his children and grandchildren to help fix or build fence, pick up rocks, and work cattle, always pointing out that it was important to teach a good work ethic. Planting trees or building fences, they both needed to be laid out straight, no matter which direction you were looking. He was also a natural engineer, Harold could always find a way to improve a piece of machinery, often taking a brand new piece of equipment and just making a slight change and making it much better. Harold met the love of his life, Betty, at the Rosemount Picnic in 1966. Harold started building their new home in January 1967. It was not completely finished, but ready to move into by June. Harold and Elizabeth (Betty) Knochel Wachter were married June 10, 1967 at St. Mary's Catholic Church in Lacona, Iowa. For their honeymoon, they took a trip to Montreal, Canada to the World's Fair. Harold and Betty were blessed with four children: Barb, Lisa, Nick, and Jason and their families. Harold always considered his family as a blessing. He was forever grateful for his wife Betty, and their children, grandchildren, and great grandchildren. He loved to joke and make bets with his grandchildren. He loved playing baseball with them and even boxing with his kids and grandchildren. He also enjoyed playing cards, and the grandchildren remember playing rummy with him. In later years, he enjoyed sitting back and watching the little ones play. He would often scoop them up in his arms and take them on a "Let's Go See" as they walked around the house or farm. Harold was a quiet man, but a great listener. Harold had a strong faith and being a member of Holy Trinity: Rosemount, St. Mary's and St. Augustine, he always volunteered and supported his church and community. Harold passed away January 11, 2021 at the Good Samaritan Center in Indianola. He will be greatly missed by his wife, Betty; children: Barb (Marlin) Balk, Lisa (Marty) Schneider, Nick (Silvia) Wachter, and Jason (Colleen) Wachter; 14 grandchildren: Ashley (Chance) Mesecher, Justine (Cody) Broughton, Heidi Flowers, Waylon Balk, Jed Balk, Bo Schneider, Victor Wachter, Eve Balk, Ian Schneider, Teague Wachter, Mario Wachter, Harold Balk, Kellen Wachter, and Barrett Wachter; 5 great grandchildren: Rhett, Brexley, Dawson, Witten, and Ayla; along with his sister, Mary Ann Ohnemus; sister-in-law, Carol Wachter; and many nieces, nephews, relatives and friends. Preceding him in death were his parents: John and Laura Wachter; and siblings: James Wachter, Alice Demichelis, Virgil 'Lefty' Wachter, and Evelene Ohnemus. Cemetery Details Rosemount Cemetery 22925 Quebec St.
Lacona, IA 50139 Rosary

To send flowers to the family in memory of Harold W. Wachter, please visit our flower store.