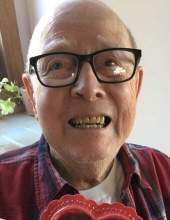 In lieu of flowers, memorial donations can be made to First Lutheran Church in Chariton, Iowa or Lutheran Lakeside Camp in Spirit Lake, Iowa. Services for Harlan Ranshaw will be July 3, 2021. The family will be attending the 11:00 a.m. community band concert on the Chariton square. A Celebration of Life service will begin at 1:00 p.m. at the First Lutheran Church in Chariton, followed by a time of fellowship and refreshments.

You may join the family by watching the livestream at the following link:
https://my.gather.app/remember/harlan-ranshaw

Harlan Lewis Ranshaw was born August 28, 1925, to Samuel and Fern (Swisher) Ranshaw in North Liberty, Iowa. Harlan was raised alongside his sisters, Bernice and Pauline, in both the North Liberty and Iowa City areas. He graduated from Iowa City High School with the class of 1943.

Harlan enlisted in the Army at the age of seventeen. He was stationed in Texas during WWII. After WWII, through the Lutheran Church, he went to Germany to help rebuild an orphanage.

Harlan graduated from UNI in 1951 with a B.A. in Industrial Arts. Harlan married Betty Genck in 1951, and they moved to Allison, Iowa where they both taught school. They were blessed with a daughter, Linda. They moved to Chariton, Iowa in 1953. The couple later divorced.

Harlan was a driver’s education and industrial arts teacher in Chariton. He met Delores Bricker, who was a business teacher, and they were married on December 27, 1957. The couple had two daughters, Sheryl and Karen.

Harlan is best known for teaching Building Trades where his classes built 18 houses. During his lifetime, Harlan built and remodeled many structures both locally and statewide. He volunteered for over 25 years at Lutheran Lakeside Camp in Spirit Lake, Iowa leading carpentry crews and serving on the board that planned and built the new meeting hall. Harlan was a member of three different mission teams, rebuilding after Hurricane Katrina. Anyone who worked alongside Harlan on a Saturday knew that they would be listening to the Metropolitan Opera.

Harlan was very active in First Lutheran Church, locally, as well as state and national levels. Harlan sang with the Aeolians as well as building sets for musical performances. He served on the Chariton City Council from 1968-1972 which was the beginning of Southgate low rent housing for the elderly which in his words, “Was the greatest single thing I had to do with.”

Harlan began playing the French horn in community bands at the age of 16 and continued playing for the Russell Band and Chariton Community Band until age 93.

Harlan took his family on extended summer camping trips throughout the United States as he was a delegate to NEA and National Synod Conventions for the Lutheran Church. He also enjoyed camping at the Iowa State Fair. He liked to attend Iowa State football games. Harlan loved animals of all kinds. He had a passion for classical music and Opera.

He always looked forward to attending the Swisher family reunions. Harlan was also proud of the fact that there is a street in North Liberty that was named after the Ranshaw family. Harlan was a very loving husband, father, grandpa and great grandpa. He rarely missed one of his family member’s events while they were growing up.

At his request, Harlan’s body was donated to the University of Iowa. His cremated remains will be buried at a later date.
To send flowers to the family in memory of Harlan Lewis Ranshaw, please visit our flower store.