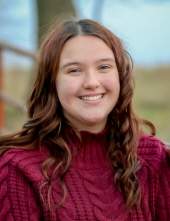 Service for Grace Marie DeHeer, 16, of Melcher-Dallas, will be held Monday, December 13, 2021 at 10:30 a.m. at the Sacred Heart Catholic Church in Melcher-Dallas. The service will be livestreamed as well, follow the link on the tribute wall. https://my.gather.app/remember/grace-marie-deheer

Burial will be at the Gosport Cemetery following the service.

Memorials may be made in care of the family and will be used to create a lasting memorial in Grace's memory. All donations made through the Tribute Fund link will go directly to Grace's family.

When you think of Grace Marie, you think of her warm smile, caring ways, generous heart, protective nature, independent attitude, and great sense of humor. She had an impact on everyone she met. As a small child she was taught to introduce herself, “Hi, my name is Grace Marie DeHeer, nice to meet you!", as she extended her hand to a stranger. I’m sure she made people’s heart leap with joy and changed their day. Also, as a small child and seeing her first snow, she exclaimed, “It ice creamed outside!” Just some ways she made us all smile.

Her dog Herbie greeted her at home when she was born, they quickly became inseparable and best friends. They became the Main St. Watchmen as they sat at the window and watched everything that happened outside. Grace was excited to get a new loft style bed until she figured out that Herbie could not sleep with her, so she slept on a mattress on the floor until Herbie learned to use the ladder.

We know that Grace was excited to have a little sister, she traded her “blankey” in for Sophia, and also traded her mom a sucker ring for the name “Sophia”. And she was also excited to have her baby sister Cecelia, but the announcement of her arrival was made close to the time when they talked about the “birds and bees” at school. She walked in the door, announced to her mother, “I know how it got there, and I know how it gets out, and I’m not going to talk about it” as she proceeded to her room. Grace was very protective of her little sisters and said, “I’ll beat up a little kid, I don’t care!”, if someone was picking on them. These are all examples of her quick wit and sense of humor that she always retained.

Grace could not tell a lie, ever. While in kindergarten she was getting ready for bed one night and came crying to her mother. When asked what was wrong, she explained how she had lied to Mrs. Willoughby about trying everything on her tray at lunch. She did not try the carrots and felt horrible she lied, but she wanted to go outside and play. When she was older, she was caught sneaking out the basement window when a perfect “Croc” print was discovered in the dirt right outside the window. When about to be confronted by mom, she confessed before Kelley had the chance.

Grace was fiercely independent, always doing things by herself, but at the same time she was very big hearted and generous. Often, she would go without so she could give to others.

Grace had good grades in school, but was a little ornery towards her teachers. It was just her sense of humor, it had been engrained in her by her family over the years. Some might call it being a smart ass, but it was her fun sense of humor that always shined through. She enjoyed dance, cheerleading, and softball. She really loved dance and truly enjoyed being a part of Azalea's Quinceañera this past summer. Grace was also excited to have been hired at Farm & Home in Knoxville, mainly because she’d be the first to know when the baby chicks and ducklings arrived.

She had many, many friends, all close and important to her. We do have to talk about her first friend. Angelina Clark and Grace have been friends, since Day one. They have always had a connection since they met as babies. They did everything together, along with Azalea, Maelee, and BrieAnna it was rare to see one of these girls without the other. Grace, as many teenagers do, almost lived half of the time at the Murillo house hanging out with Azalea. And there were also the boys that fit in with this group: Owen, Logan, Lucas, and Brady. This group of 8 kids had so much fun, got into some trouble, but were always together, and there are so many more friends that were close to Grace’s heart.