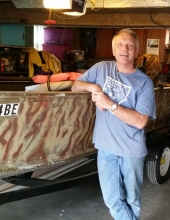 A Celebration of Life for Gary Davis Kline, 62 of Chariton will be held on Sunday, April 25, 2021 from 1:00 – 3:00 p.m. at the main shelter house in Red Haw State Park in Chariton. In lieu of flowers, memorials may be made to the Lucas County Boy Scout Troop 149. Gary believed the Boy Scouts are essential in teaching youth to become good citizens and appreciate the outdoors.

The Pierschbacher Funeral Home in Chariton is assisting the family with arrangements.

Gary was born October 16, 1958 to John and Cynthia (Talbot) Kline in Chariton. He attended and graduated from Russell Community School with the class of 1977. Gary loved to tell the story of how he first met Rose. He was 5 years old. As he climbed on to school bus #7 driven by Dale Johnson, he said hello to the little blonde headed girl in the front seat behind the driver. But she didn’t say hello back. It turns out that Rose and her brother, Dan, were allowed to ride the bus in the seat directly behind the driver, but they had to sit still and were not to bother the other kids on the bus. Gary eventually won that little girl’s heart and they became high school sweethearts. After asking Rose to marry him more than once, she finally said yes and he immediately asked her she to pick the date. Six weeks later, Gary married his soul mate and love of his life on June 2, 1979. Initially they planned to be married without a traditional ceremony, but Gary’s mother explained to him that every girl deserves to be a bride. They were married in a beautiful outdoor ceremony at the home of her parents, Dale and Mary Lou Johnson. For the newlywed homestead, Gary and his father found a trailer they could rent for $50 a month. It was “a little rough”. Thankfully, Gary and Rose found an apartment in Chariton where their 41 years of marriage began.

Gary enjoyed family. He spent may Sundays with parents and siblings for family dinners and volleyball games with Hungry Hollow Rules that lasted into the night. He valued Rose’s parents, Dale and Mary Lou, as a second set of parents. Gary loved to hunt, especially duck hunting. He had a passion for fishing and never passed up a chance to head to the lake. He took great pleasure in teaching Shannon, Zack, and Blaine some of his trade secrets when he took them hunting and fishing. He loved the tradition of the annual Kline Thanksgiving coon hunts. Adventuring on hunting and fishing trips with Joel Hibbs, Tom Gard, and many others who joined them on their annual expeditions created many a tall tale to be told time and time again. Gary made buddies anywhere he went, his quick wit and love for people would often make him the life of the party which he enjoyed. Friends and family will always remember his stories and great one-liners. His dry sense of humor and quick wit will never be replaced.