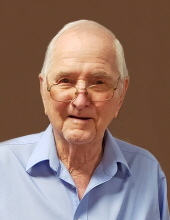 Services for Dwayne Manser, 88, of Lacona, Iowa will be held on Thursday, October 21, 2021, at 11:00 a.m. at the Pierschbacher Funeral Home in Milo, Iowa. Family will receive friends on Wednesday, October 20, 2021, from 4:00 to 7:00 p.m. also at the funeral home. Memorials in Dwayne’s name may be made to the Athletic Booster Clubs of SEW Warhawks or the Martensdale-St. Mary’s Blue Devils.

You may join Dwayne's family via livestream at https://my.gather.app/remember/dwayne-manser

Marlin Dwayne Manser was born on March 5, 1933, to Michael “Mike” Clarence Manser and Mildred (Williams) Manser at their home in Lacona, Iowa. He grew up in the area attending the Lacona High School, graduating in 1951. He then enlisted in the United States Air Force where he spent a couple of years, stationed in Savannah, Georgia and Germany. When he first enlisted, Dwayne was a medic, but they soon found out his athletic abilities, and he began playing baseball. He probably could have gone on to the pros, as he was quite the player.

After his time in the Air Force, Dwayne went on to work at the post office in Lacona as a rural mail carrier, as well as farming. He worked for years at the Lacona Locker for John Burns. In the 1970’s, he, Leo Seuferer, and Dwayne were some of the first Big Balers custom workers. Dwayne retired at the young age of 60, later suffering a heart attack in his early sixties. Dwayne continued to be a hard worker even after suffering his heart attack, going on to work at HyVee.

Dwayne met the love of his life, Joanne Clark, whom he married on March 5, 1955. The couple was blessed with three children: Michael, Michelle, and Mark. The couple enjoyed dancing together, swing dancing being one of their favorites. If a Dean Martin song was playing, you would definitely catch Dwayne and Joanne on the dance floor.

Mansers were a farming family, raising hogs and cattle. The two worked diligently together. Occasionally, you could find them at the horse races as well.

Dwayne loved his family immensely. He worked hard and provided for them and made a point to always be attentive to all of their needs. This showed through the years when he became a grandpa and great grandpa. His family knew that nobody was perfect, but to them, he came as close to perfect as a human being could get. If there was a sporting event that any of the children or grandchildren were involved in, you would definitely find Dwayne in the crowd cheering them on.

Dwayne knew how to become a favorite of his grandchildren. When they were babies, he would start by offering them a cookie or something sweet to lure them into his lap. It didn’t take long for him to have them wrapped around his finger. He also taught them to fish, hunt, and even drive. He was definitely a very attentive, loving grandpa.

Not only were Dwayne’s grandchildren and great grandchildren extremely important to him, but his entire family was also the center of his world. If needed, he was there. He did not hesitate to always put them first. Not only was he a genuine family man, but he was also just an all-around wonderful guy. His personality was contagious. Others flocked to Dwayne because he was so calm, pleasant, and easy going. He just never saw the need to get upset over things that were uncontrollable. Therefore, Dwayne Manser did not know a stranger, and never treated anybody as one.

Other qualities Dwayne possessed were his love for gardening. He always had some of the largest gardens, and he enjoyed tending to them. He also enjoyed tractor rides, often taking the grandkids with him, so they could have the experience of enjoying nature and the country life.