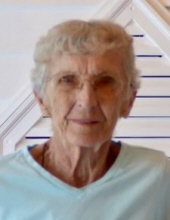 Doris Darlene (Horst) Hansaker was born September 23, 1926 in Colome, South Dakota in a yellow house on the hill, along with her twin brother, Donald, to Jacob and Pearl (Wehenkel) Horst. Doris also had four more brothers and one sister. When the kids started school, they were so small, Doris’ dad had to build them desks out of wooden orange crates, because the regular desks were too big for them.

Doris’ family lived across from a field and when they would plow it up, she and her siblings would go over and look for arrowheads. The story was that an Indian battle had taken place there. Her brother always seemed to find some of the most perfect ones.

When Doris was 10 years old, her family all went to Cheyenne, Wyoming to live, as there were not many jobs in South Dakota. She went to the Lutheran school through 8th grade, then to the public schools. Doris graduated in Wyoming. After graduating, she took her youngest brother to Colome to see where they used to live. She said she did not think her brother ever forgave her for taking him there, because when they went there, it was by train. It had rained and they still had mud roads.

Doris began working at the age of 14 or 15 at F. W. Woolworths, a 5 and dime store, on Saturdays. At 16, she was allowed to work after school as well. After she graduated from high school, she went to work as a bookkeeper in the office. She was working there until she met her husband, LaVerne, who she met through LaVerne’s sister. They dated until he joined the Navy during the war. When he came back home, they were married on July 7, 1946. To this union, they were blessed with two daughters: Sandra and Patricia. LaVerne and Doris had 62 wonderful years together before he passed away.

Doris was an extremely hard worker and worked up until she was 88 years old. She had worked at Halls Hardware for a while with Bus and Dorothy Nelson. She also worked for Northcote Locker in Melcher for 30 years and the D&S Grocery Store for several more years. Doris had retired 3 times before she finally stopped working. She never gave up, always working hard and giving all, she did with all she had.

Doris enjoyed playing Crazy 8s at the kitchen table with her grandchildren. She used to move horses in the old blue van, which was usually an all-day affair. She just loved Christmas and Easter and spending time with her family. It gave her great pleasure giving gifts to all her grandkids.

Preceding her in death were her parents: Jacob and Pearl Horst; husband, LaVerne Hansaker; and siblings: twin brother, Donald; Bobby, Warren, Orville, and Edna Horst.
To send flowers to the family in memory of Doris D. Hansaker, please visit our flower store.