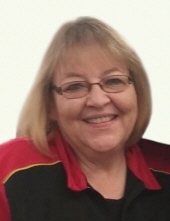 A celebration of life service for Debbie Brown, 64, of Chariton will be Thursday, June 24, 2021, at 11:00 a.m. at the Pierschbacher Funeral Home in Chariton. The service may also be viewed by following the link: https://my.gather.app/remember/debbie-brown

Family will receive friends on Wednesday evening from 4:00 until 7:00 p.m. at the funeral home.

Memorials are requested in care of Debbie's family. Debbie had so many friends in the community, the family would love if you could share a memory of how she touched your life. This may be done on the website or at the funeral home.

Debra Lynn Flanders was born on January 23, 1957, to Francis and Mildred (Caulkins) Flanders in Des Moines, Iowa. Debbie spent most of her younger years in the Hartford area, moving to the Chariton area in 1971. At the age of 20, she met Rick Brown in church. They were married April 13, 1979. This union was blessed with three children: Felicia, Jeremy, and Justin.

Debbie was able to spend her children’s younger years staying home and raising them. She also helped her parents at the Veterans Home in Chariton and the nursing home in Russell. She later became the Activity Director at Northridge.

Debbie came from a large family, being the youngest of 7, but her love for family didn’t stop there. She had so many people that came into her life that touched her heart in a way that she would always consider them family as well. For several years, Rick and Debbie opened their home to foster children. It could be a challenge at times, but they truly just wanted to make a difference in the lives of those children who needed it.

Debbie was just a wonderful lady who loved helping others in the community. Her gift of giving was shown by helping with the Casey’s fundraisers, preparing meals for high school sporting events, and holding the position of Girl Scouts leader where she also took them on a jail tour. Debbie also generously gave her time to help with the bike-a-thons, St. Jude’s Hospital fundraising, as well as fundraising for MDS. She enjoyed assisting the kids with school floats and helping with proms.

Along with her generous side, she had an ornery side too. It was not unlike Debbie to play jokes on others, especially picking on Coach Smyser. She did not know a stranger, and she didn’t care about how much money was in your bank account, your job title, or what kind of car you drove. All that mattered to her was how well you treated others.

Debbie’s faith ran deep, and she was truly a Christian woman. To know her was to love her. She had a heart of gold and true love for God that shown bright in everything she did. Her family was extremely important to her as well. With every grandchild, her heart and love for family grew bigger and bigger. Every single one was absolutely precious to her.

Debbie’s favorite holiday was Christmas. If you ever toured her home during Christmas time, you would know how much she loved it.

Debbie’s career at Casey’s was such a good fit for her, because she could interact with others and her ability to be such a compassionate, caring lady, made her a wonderful employee. Her caregiving abilities were shown with her family, friends, community, and job. There was never a time that Debbie didn’t put other others before herself.