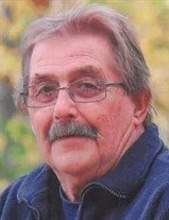 Funeral services for Carl Allen Werts, 74, of Russell will be held Wednesday, April 14, 2021 at 11:00 a.m. at the Pierschbacher Funeral Home in Chariton, Iowa. Family will be present to meet with friends on Tuesday, April 13, 2021 from 4:00 until 6:00 p.m. at the funeral home. Memorials may be made to the Russell Volunteer Fire Department.

You may join Carl's family via livestream at https://my.gather.app/remember/carl-allen-werts

Carl Allen Werts was born March 10, 1947 to Dean and Ruth (Deutschle) Werts. He grew up in the Russell area and graduated from Russell High School in 1965. While in school he enjoyed little league, football, and basketball. After high school he attended college in Centerville Community College.
Carl served in the United States Army during Vietnam serving from 1966 to 1968. He never said much about his service, but he was proud to belong to his local American Legion Post 308 in Russell.
In 1973 Carl packed up his two-year-old VW Bug convertible and moved to Taylorville, Illinois where he landed the assitant manager position at Gibson’s. His loaded-up car sitting in the parking lot made everyone wonder who this guy was, including a girl named Ellen “Pete” Peters. His charms won her over and he married the love of his life two months later on August 4, 1973. And for the last 47 years they have been by each other’s side. They have raised a wonderful family including his children: Shawn (Katie) Werts and Jaci (Tom) Ripperger; and most importantly the ones who called him Papa: Drake, Delaney, and Kinser.
You could say Carl lived life to the fullest and had a great love for his entire family and all of his friends. Ellen might call him unpredictable. There were many spontaneous purchases made without telling his wife. Some weren’t grand, such as adding to his collection of beer signs, shot glasses, or Hawkeye memorabilia. Others like vehicles and puppies were a little harder to manage, but Carl was also lucky, so things would usually turn out with a great story or fun memory. Like the VW Bug he bought new in 1971, then suddenly sold it only to track it down and buy it back many years later. His dog Ozzy was also one of those spontaneous things that turned out to be a great joy in his life that he would not trade for anything.
He was an entertainer. Carl loved to have people over to his man cave, decorated with all things he treasured: Black & Gold, beer signs, and shot glasses. He was an excellent cook and loved to smoke meat, bake pies and other sweets, and would always have ice cream. There were many trips taking the Bug to Centerville to the drive thru for a raspberry shake. He also enjoyed “helping” at his wife’s restaurant, Pete’s Place in Russell, where he did enjoy his time there but would often have to get kicked out of the kitchen so they could get something done.
Carl had worked for Morton Buildings as a crew member and as a salesman. He then worked for Keith’s Electric for several years, Life Investors Insurance and Russell Heating & Plumbing before going to Johnson Machine Works where he worked for 18 years before retiring. He loved working at Homestead in Chariton after retiring, not only was he close to his father who was a resident there, but he enjoyed helping all the people there. Carl made a point to stop by the facility at least once a day to check in on his father even when he wasn’t working.
Carl passed away April 8, 2021 at the Lucas County Health Center in Chariton at the age of 74. He had so much more life to live, but he has lived a full live and taught his family how to enjoy and love every moment. He will be greatly missed by his wife, Ellen “Pete”; children: Shawn (Katie) Werts and Jaci (Tom) Ripperger; grandchildren: Drake, Delaney (Chandler), and Kinser (Sammie); siblings: Rhea (Craig) Weideman, Mark (Nadene) Werts, and Lynn (Freddie) Stuart; in-laws: Debie (Daryl) Keiser, Rick (Sheila) Peters, Carole Brown; along with many nieces, nephews, relatives, and friends.
Preceding him in death was a son, Todd Anthony Werts, and his parents: Dean and Ruth.
To send flowers to the family in memory of Carl Werts, please visit our flower store.