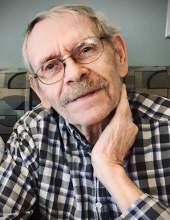 Alan T. “TT” Vander Linden, 79, of Marshalltown, Iowa, passed away on June 11, 2022, at the Iowa Veterans Home. A Celebration of Life Open House will be held on Saturday, August 6, 2022, from 4:00 to 7:00 p.m. at the Memorial Hall in Pleasantville. A Private Graveside Service will be held prior to the event. Memorials can be made to the Iowa Veterans Home or Iowa River Hospice.

Alan served in the United States Army in Germany from 1965 to 1967 during the Vietnam War. After serving, he began his career in construction as a plumber, electrician, and carpenter. He worked for various places during his working years including Vander Linden Bros. Construction in Pleasantville, Rose City Plumbing in Pleasantville, Cosmos Cable in Pleasantville, and Menninga Electric in Pella.

Alan married Sherry Zickel on October 10, 1969. To this union, they were blessed with three daughters: Edye, Joni, and Emily.

Alan was involved in the community as a member of the St. Paul’s United Methodist Church, American Legion Post 108, Masonic Lodge 128, and the Pleasantville Jaycees. He had a passion for the outdoors. When he wasn’t working, you could often find him watching his girls play sports, fishing, hunting, golfing, doing yard work, chopping wood, or collecting rocks. He had an impeccable, ornery sense of humor, often telling his “Dad Jokes” and playing pranks on others. He was an avid Iowa Hawkeye fan as well as a supporter of Pleasantville High School sports, especially softball. Alan was hard-working, quick-witted, humble, and generous with his time and talents. He was loved by all who knew him.

Alan received his Quilt of Valor in May 2022, at the Iowa Veterans Home. This award meant a great deal to Alan and his family, recognizing all of his achievements and sacrifices.

To send flowers to the family in memory of Alan T. Vander Linden, please visit our flower store.